All the photos from the tournament can be found here.  Match highlights and the full match replay available via YouTube

After the success of the 2015 Vawdon Cup the team were full of confidence going into yet another State Cup campaign.  Unfortunately Sam Rodgers and Zara Nicholas were both unavailable due to illness and into the team came the ever reliable Brittney McLeod and young player of the future Brittney Clifford.  Laura Peattie was once again Captain with Nicky Albery awarded the Vice Captaincy role.  The format of this year’s competition was the toughest available with one pool of ten teams, everyone to play each other once and then the top four teams in a Semi and Grand Final series.  This season Stuart Edgley from the MWTA Executive presented the playing shirts to the team with three debutants to the Manly Women’s Premier League State Cup team in Kasey Dragisic, Brittney Clifford and Emma Williams.

Day one opening game saw the Sea Eagles up against the Wollongong Devils in what could have been a potentially tough game.  However the team were fully focused and got the win by 9-2 in a very pleasing first up performance with Yasmin Meakes starting in style grabbing four touchdowns.  Second match was a 9-4 victory over Norths UTS Bears, followed up with a 11-1 win over the Penrith Panthers.  The weather was excellent and it was obvious recovery would be a key factor come the back end of the tournament.  The final game of the day was another win this time over the much improved Berkeley Vale Panthers by 4-0, with Hannah Dyball, Yasmin Meakes, Brittney McLeod and Nicky Albery all getting touchdowns.

Saturday was an even bigger day with three huge games against the top teams.  This started off with the Sea Eagles up against arch-rivals the Western Suburbs Magpies.  Once again Manly showed their recent dominance over the Magpies with a solid 5-1 victory with Yasmin Meakes snatching another hat-trick and Laura Pettie, Danni Davis and Nicky Albery all at their best.  Next up were the Defence Warriors with the Sea Eagles looking to try and conserve energy where possible, getting the win by 11-3.

The Stadium was the venue for the Vawdon Cup Grand Final replay up against the Eastern Suburbs Roosters.  In a similar result to the Vawdon Cup the Sea Eagles got the win by 7-3.  The final game of the day was up against the Louise Winchester led Canterbury Bulldogs.  The Bulldogs were bundled out of the Vawdon Cup this season in the semi-finals against the Roosters and their focus since then would have been to win yet another State Cup title.  In a very close tussle both teams drove at each other end to end in a classic game of intense running touch.  The Bulldogs always play their best touch against the Manly team and today was no exception.  The Sea Eagles thought they had victory in the dying stages when Hannah Dyball scored however Canterbury evened it up for the game to end in a thoroughly enjoying 4-4 draw.

Sunday finals day had arrived but before the final series there was one more round game to be played, for the Sea Eagles this was against the Newcastle City Knights.  Any team that has Ash Quinlan in their ranks has plenty of scoring ability, however the Manly team defended strongly and got the win by 8-1.  The top four was now sorted and with the Sea Eagles sitting on top with a better for and against over the Bulldogs, they were matched up against the fourth placed Roosters.  In the other semi-final the Bulldogs were up against the Magpies in an all Mets affair.

Manly knew this semi-final against the Roosters would be hard work and both teams had certainly seen a lot of each other in past few weeks.  The Sea Eagles were aware that Maddie Studdon could single-handedly beat any side so the team were focused for a solid performance.  In a grinding game in humid conditions Manly got the win 5-2 with early touchdowns to Hannah Dyball and Tayla Clifford paving the way for an excellent classy victory.  As this game completed the other semi-final continued on into drop-off.  Never to be underestimated the Magpies had upset the Bulldogs to grab the win by 3-2.  As a result this set-up a Sea Eagles versus Magpies Grand Final show-down.

Manly went into the final game of the tournament with an abundance of confidence and self-belief and favourably with no injury concerns.  Following the usual build-up with the players in the tunnel and national anthem being played, the team were all smiles as they knew their time had arrived.  Port Macquarie had indeed put on fine weather with hot and clear conditions greeting the players.

Manly had the tap-off and from the first play hit the lead through nice foot-work by the scooping Danni Davis who linked up with sister Shellie to make it 1-0.  A few minutes the lead was extended to 2-0 when Emma Williams hot-stepped her way to the score line.  Then after 6 minutes it was 3-0 when Danni Davis was at her elusive best scoring herself.  Wests were shell-shocked and it was the perfect start for the Sea Eagles.  Next to score was Hannah Dyball after a nice static set-up play with Danni & Shellie Davis.

Wests then hit back and scored a nice touchdown in the corner.  They then scored again through a length of the field intercept to now only be down by 4-2.  However the Manly team stepped it up once again and when Kasey Dragisic hit a magic hole after an awesome Nicky Albery long ball the game was all but over.  Jubilant scenes then followed the full time siren with the Sea Eagles winning the State Cup undefeated and also the double after taking out the Vawdon Cup title only one month earlier.

For the Sea Eagles there were a multitude of strong performances with Danni Davis deservedly being named the NSWTA Player of the Final.   In other team awards Players Player was Steph Maiolo with the Coaches Awards going to Kasey Dragisic (AD), Nicky Albery (SP), Yasmin Meakes (JC) plus Chloe Cheney (BG) and Steph Maiolo (BG). Special mention also needs to go to Brittney McLeod who after missing nearly the entire Vawdon Cup season once again produced her best at State Cup.  Additionally Emma Williams took every opportunity presented to her during the entire season and was a model of consistency thoroughly earning two championship medals.  Match highlights and the full match replay available via YouTube

In the Women’s 20’s division the Manly Sea Eagles went through undefeated only to get beaten by the highly fancied Murwillumbah Mavericks.  The team had an excellent tournament winning their semi-final 7-3 over Newcastle City Knights and then losing in a tight Grand Final by 6-5.  Congratulations to the award winners for the team with the Women’s 20’s Players Player going to Lucy McDonald and the Coaches Awards to Pihuka Duff, Paige French and Maddie Hartman.  You can watch the Women’s 20’s Grand Final here. 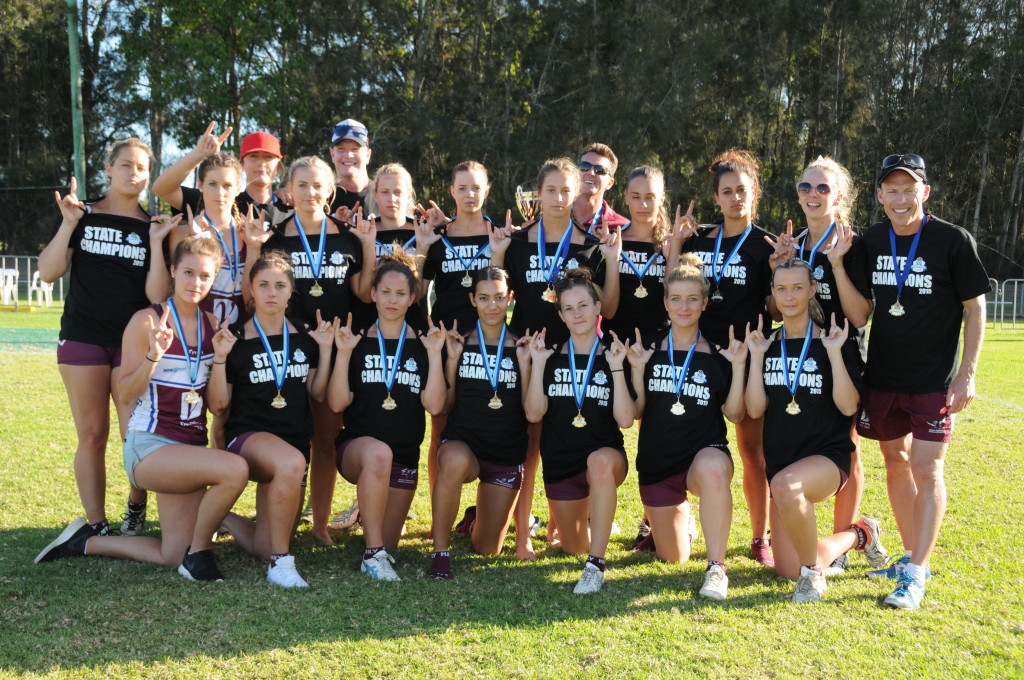