State Cup 2014 got underway with the Sea Eagles in Pool B up against the Berkeley Vale Panthers, Parramatta Eels and Dubbo Devils. The top two teams from the pool would be promoted to the Championship series which would take place commencing on the Saturday. Game one was against the Berkeley Vale Panthers – a team that did very well in their first season in Premier League at Vawdon Cup. The Sea Eagles got their campaign off to a great start with a solid 10-0 win. Berkeley Vale were missing a number of their stronger players, however Manly did the job with two double touchdowns to Sam Rodgers and Hannah Dyball. Game two was up against the Parramatta Eels on the Stadium – a match that the Sea Eagles always look forward to against their Scorpions counterparts. Once again Manly put in a strong performance with Yasmin Meakes getting a hat-trick of touchdowns to help secure a 9-0 win.   The final game of the day was a scrappy 7-1 victory over the Dubbo Devils, with the main objective being getting through the game without injuries and trying to conserve some energy in the Port Macquarie heat. Three wins on day one meant that the Sea Eagles moved onto the Championship series with Sarah Peattie and Elesha Dougal both putting in pleasing performances for the team.

Saturday’s first game was against the Eastern Suburbs Roosters, once again on the Stadium. This was a big game, as the winner knew they would most likely go through to the semi-final and avoid an extra game via a quarter final appearance. The Roosters started the game strongly and took an early 2-0 lead. However Manly hit back well with Elesha Dougal and Danni Davis having strong games. Once again Jenna Hitch continued her strong tournament form, with the Sea Eagles eventually running out winners by 4-3. Game two for Saturday was against the Northern Suburbs UTS Bears. Touchdowns by Zara Nicholas, Elesha Dougal, Laura Peattie and a classy finish in the corner by Steph Maiolo saw the Sea Eagles run out 4-1 victor’s against a solid Norths team. The final game for Saturday was against the Wollongong Devils, the team that had knocked out Manly from the 2013 State Cup. Played on the Stadium the Sea Eagles put in their strongest performance of the tournament winning 9-3 with a double of touchdowns to Yasmin Meakes, Elesha Dougal and Zara Nicholas.

Sunday Finals day had arrived with Manly matched against the Bulldogs and the Roosters up against the Wests Magpies. Manly were looking forward to the challenge ahead and a chance for redemption following their Vawdon Cup Grand Final loss to the Bulldogs. A midday tap off gave the Sea Eagles extra preparation time and when it was time to commence they looked ready to go. However in what was a near perfect performance by the Bulldogs they scored at regular intervals throughout the game to grab a unlikely 5-0 scoreline and progressed to yet another State Cup Final. The Sea Eagles did have opportunities to score however crucial errors prevented them getting on the scoreboard. It has to be said the Manly defence wasn’t as strong as it should have been and when a team has the class of the Winchester sisters they will punish you. The Bulldogs went on to defeat the Roosters in the Final by 2-1 after the Roosters upset the Magpies in their semi-final.

Jenna Hitch swept the team awards easily taking out the Players Player and both Coaches awards and looks to be back in career best form. Following in her footsteps were Sarah Peattie, Elesha Dougal and Danni Davis who all have solid tournaments. Yasmin Meakes, on the back of her 2014 Sea Eagles Rising Star Award, keeps impressing with another dominant performance bagging 9 touchdowns and defending just as strongly. Shellie Davis and Steph Maiolo were making their Premier League State Cup debuts and both players had pleasing tournaments which is an excellent sign for the future.  So another season over and done with and only two losses to report, however these were critical losses impacting the overall success of the season.  Photo’s from the tournament thanks to Sandra Dyball can be found here. 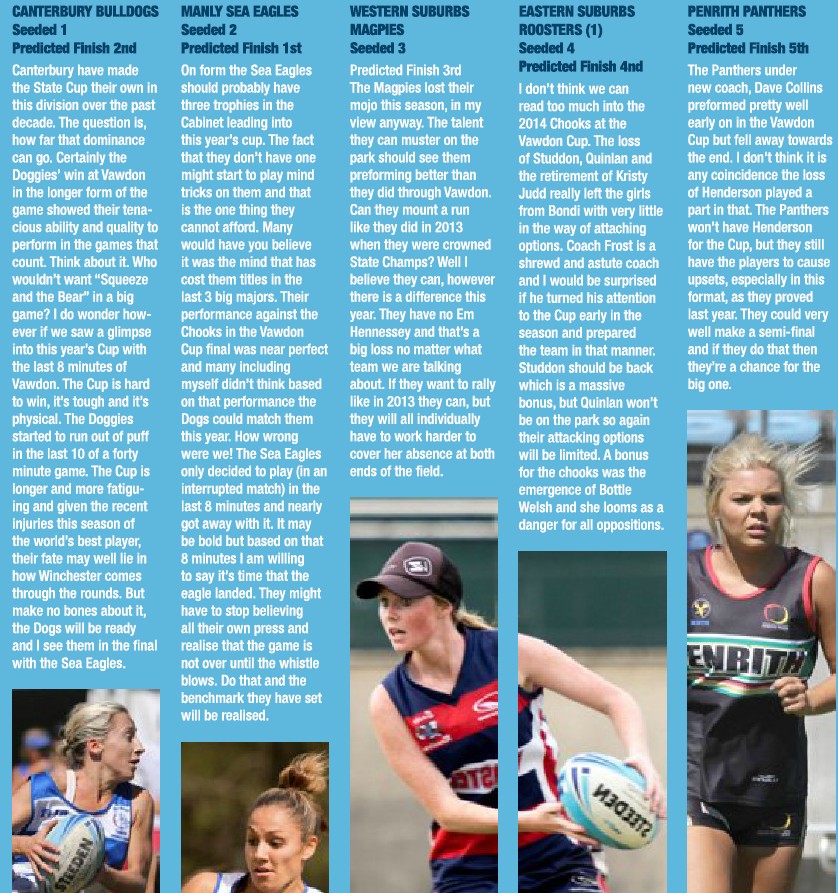 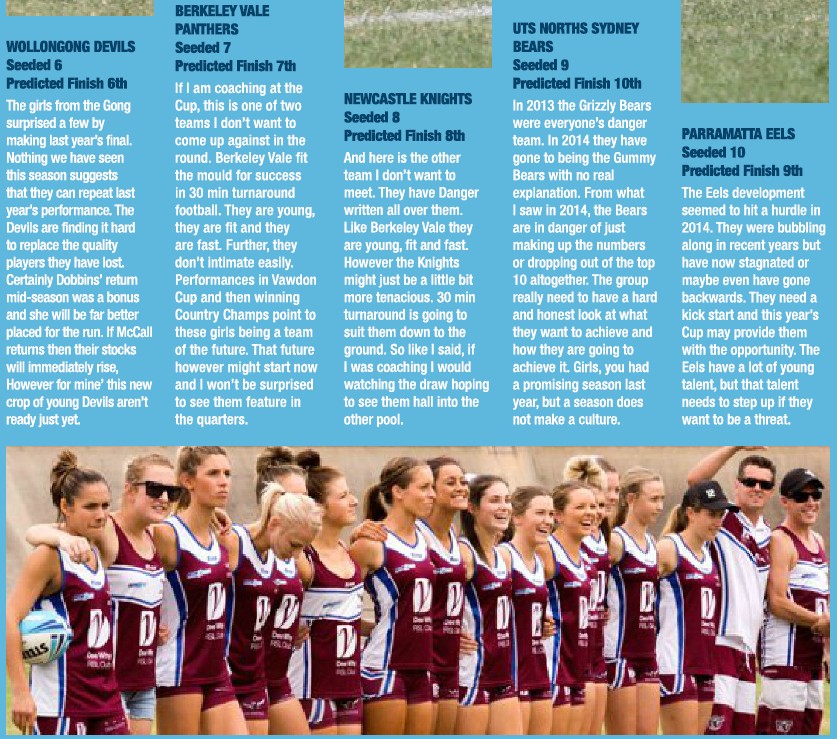