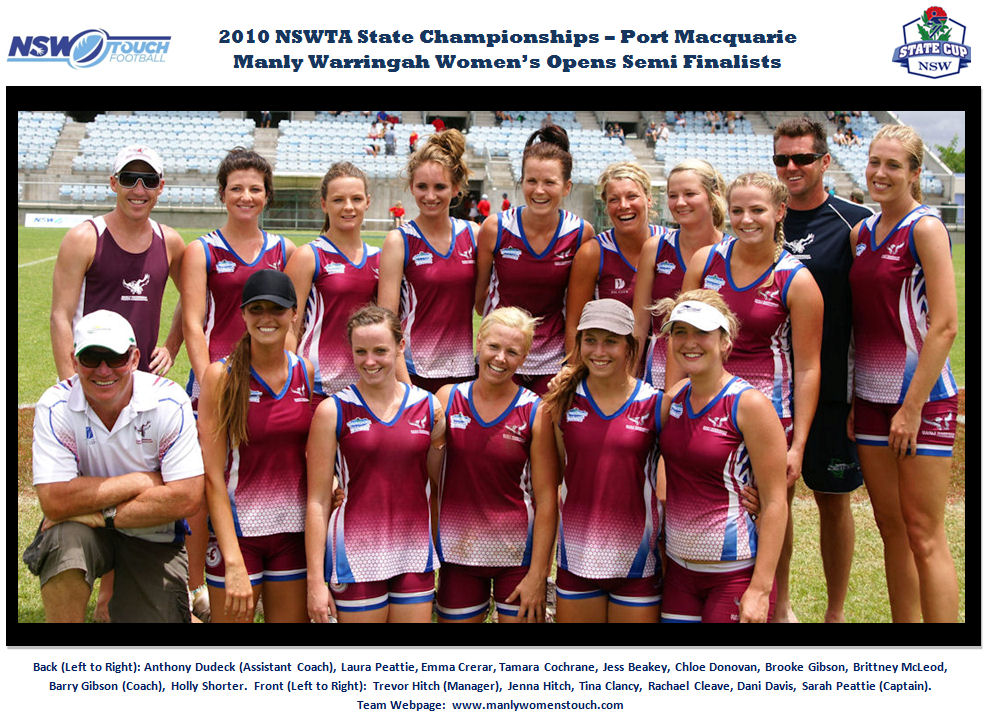 After months of preparation the Manly Women’s Opens were looking forward to the challenge that lay ahead at Port Macquarie.  Not needing any extra motivation the girls were fired up even more when reading negative comments in the State Cup preview magazine about the teams’ poor performance in the Vawdon Cup.    The Manly girls knew they had to get off to a good start and were up against the unknown quantity in Alliance in their first round game.  As this game wasn’t until Friday mid-morning this gave the team an ideal opportunity to undertake an early morning training session at a quality venue near-by the team accommodation.  The team CD was then queued and the bus made it’s way to Tuffens Lane Field 2 with the girls ready for action.

The Alliance game commenced with the Manly girls first to get onto the board when Jenna Hitch went through from acting half to link up with Rachael Cleave after only 4 minutes.  A short time later Jenna then scored herself diving after a sweeping move.  It was just the start Manly were aiming for in the warm overcast conditions.   Alliance did hit back scoring after 10 minutes to make it 2-1 to Manly.  However the Sea Eagles lifted the tempo and 2 minutes later Emma Crerar scored.  Not to be out done Jenna Hitch scored again after a nice colour ball with Rachael Cleave.  Dani Davis then scored back to back touchdowns to make it 6-1 with 6 minutes to go.   Manly were then reduced to five players for a defensive line penalty and Alliance took advantage scoring.

However the final try was to Manly once again, when Rachael Cleave went from acting half to link up with winger Brooke Gibson making the final score a resounding 7-2 victory to the Maroon & Whites.  The standout performances in this first game were Jenna Hitch and Dani Davis who both scored two touchdowns with Jenna setting-up another. 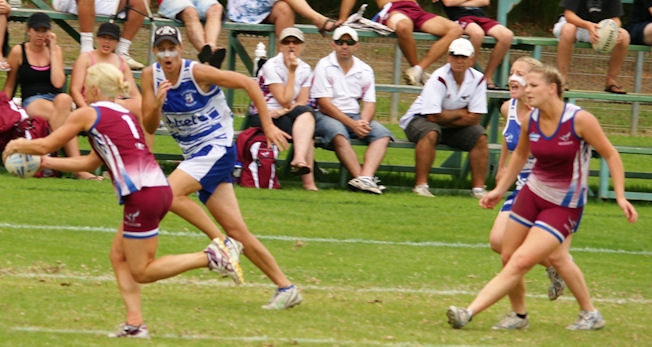 Manly’s next game was a big one against the Wollongong Devils who would be full of confidence following their break-through Vawdon Cup title win only a few weeks prior.   For Manly their start couldn’t have been worse with Wollongong scoring from the tap off and then a run-away touchdown from half way after 2 minutes.  Then after 16 minutes they extended their lead to 3-0.   Manly hit back shortly after when Sarah Peattie set-up sister Laura making it 1-3.  Wollongong then scored again to finish the game 4-1.  A game for Manly to both put behind them but also learn from – with a very poor start gifting Wollongong an early lead.  Well done to Wollongong who played with extreme confidence and fast running.

Day one had come to a close and at the team meeting that evening the team remained positive with a win and a loss.  The next day would present two first-up potentially awkward games against Campbelltown and Parramatta.  For the Manly girls to progress to the Quarter Finals on Sunday they knew they had to win these games.  The final round game for Saturday was a big one against the top ranked team in the Canterbury Bulldogs.

Saturday morning arrived and once again overcast conditions were present and Manly versus the Campbelltown Ghosts got underway.  From the outset it was obvious Campbelltown weren’t going to be a pushover and they ran with great speed and purpose.  For Manly Tina Clancy and Brittney McLeod were having strong games and after 14 minutes Manly scored when Laura Peattie set-up Tamara Cochrane.  Keen to avoid letting Campbelltown back into the game strong defence from Manly held them out.  Manly were driving the ball well and with 5 minutes to go a nice move with Rachael Cleave and Laura Peattie saw Brittney McLeod score.  A minute later Sarah Peattie went from acting half to find Jess Beakey, and then she scored a double via nice set-up play by Rachael Cleave.  The game ended in a 4-0 victory to Manly and it was an extremely pleasing result earnt through excellent defence, patience and field position.  The standout player for Manly was Brittney McLeod who led from the front and really stood up to be counted. 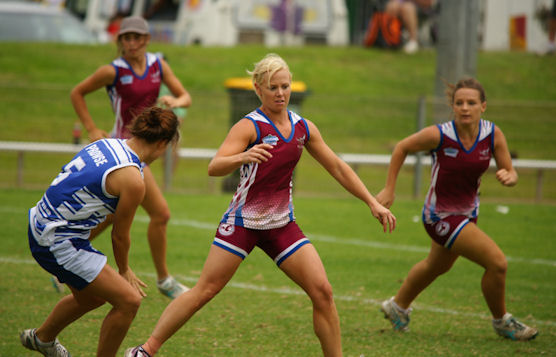 After a long break Manly’s next game was against the Parramatta Eels.  Manly scored first after 4 minutes through Chloe Donovan.  However Parramatta hit back well when Sydney Scorpions young rep Alana Lamerton went from acting half after a lapse in concentration in the Eagles defence, evening it up at 1-1.  Manly weren’t looking at their best although made it 2-1 when a Sarah Peattie long-ball found the ever reliable Brooke Gibson.  The next 10 minutes were a scrappy affair with Manly probably guilty of trying too hard.   With 9 minutes to go nice lead-up play by Jenna Hitch and a great late pass by Chloe Donovan resulted in Tamara Cochrane scoring.  A minute later Jess Beakey scored to make it 4-1.  The final touchdown was a nice diving effort by Laura Peattie.  Overall not the best game for Manly however these one-off poor games are common in such tournaments.  A win was the main result required and it was gained.

The final round game for Manly was now up against the top team in the Canterbury Bulldogs.  Manly went into the game knowing they had secured a spot in Sunday’s Quarter Finals however wanted to come out all guns blazing and match it with the Bulldogs.  And that they did.  The first 15 minutes of the game was an absolute cracker with both teams playing up tempo, mistake free, quality touch.  Manly were keeping a close eye on the Canterbury Australian Women’s Opens players in Kelly Woods and Louise Winchester managing to contain them well.  For Manly all the girls were playing at their best . The Sea Eagles were very unlucky not to take the lead when Holly Shorter was just touched as she looked to score.  However Canterbury finally scored and then gradually built on their lead to take a 3-0 advantage.  Unfortunately for Manly Tina Clancy injured her shoulder and had to be assisted from the field.  Never giving up Manly scored a touch-down through Rachael Cleave with the game ending 3-1 to the Bulldogs.

Saturday night was a relaxing evening for the team knowing that a new more challenging competition lay ahead the next day.  The spirit and desire at the team meeting was all positive with a Quarter Final line-up confirmed against the team they wanted to meet in the Wests Magpies on the main Stadium.   After a video session and game plan discussion next stop was the Stadium on Sunday. 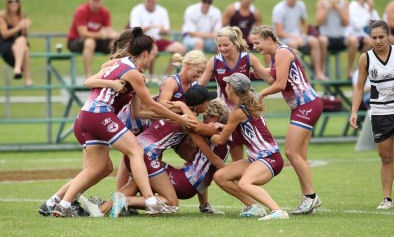 Sunday morning arrived and “Eagle Rock” pumped from the team bus as they made their way to the fields.  Once again the weather was humid and overcast and the main Stadium was looking in excellent condition.  A good warm-up saw the girls ready to go with all players pumped for a massive performance.  Captain Sarah Peattie won the toss and Manly started on the attack creating an opportunity from the tap off but were unable to score.  The game was at a good pace with both sides looking to get the upper hand early.  Manly knew they had to maintain good field position so getting off their line and over half-way was crucial.The Sea Eagles took a 1-0 lead when Sarah Peattie scored from a nicely worked move involving young guns Dani Davis and Emma Crerar.  Dani Davis had started the game excellent each time running the ball extremely well with intent.   Wests looked to hit back but their main strike players were continually put under pressure and looked frustrated at the up-tempo solid Manly defence.  The Manly sub-box was pumping, full of energy and intensity and when Manly scored again through nice footwork from Tamara Cochrane confidence grew even further.

Manly didn’t want to rest with 2-0 and were looking to increase their lead at every opportunity.  Rachael Cleave and Chloe Donovan were leading by example driving the ball extremely well.  For West’s their frustration grew even further although with 7 minutes remaining they scored after confusion in the Manly defence.  This spurred the Maroon & Whites to lift to the next level and they were determined not to let this game slip.  The full-time siren was met with joyful scenes, the Manly camp ecstatic at progressing to a semi final with both teams congratulating each other on a very tough battle.

Next game for Manly was a semi final against the number one ranked side in the Canterbury Bulldogs who were gunning for their fifth consecutive State Cup title.  Once again the Stadium was the venue with Canterbury having the advantage of not having to play a Quarter Final as a result of winning their pool.  Manly’s attitude to this game was that they had nothing to lose and were out to replicate their effort against the Bulldogs in their last round game the day previous.  For Canterbury their last round game was against Manly and they knew the oppositions confidence would be sky-high after ending West’s campaign.  The Bulldogs would no doubt be looking towards their Australia Women’s Opens players to guide them to another State Cup Final appearance. 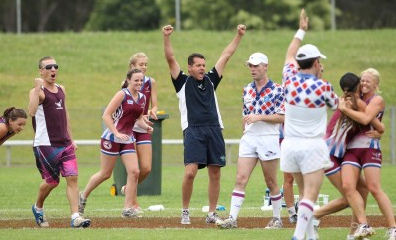 The Semi final commenced with Canterbury looking full of running.  They managed to score early on and about 7 minutes in took a 2-0 lead.  Manly were determined to compete the entire game although they did start to tire with the morning Quarter Final looking to take an edge off their game.  The Bulldogs defence was strong with their senior players including Kelly Woods looking a class act and taking control of the game.   Manly scored one touch-down through Brooke Gibson however the Bulldogs were too experienced and went onto win the game 5-1 booking themselves a Final against Wollongong  – who they went on to beat in a drop off 5-4.  Congratulations to the Canterbury team on winning their fifth title in as many years – they were a pleasure to play against as they really play the game in the right spirit.  This meant Manly finished a credible third, a fantastic achievement after being written off my many except themselves after a poor Vawdon Cup.The final team meeting later that evening had a great feeling of emotion and pride amongst the team.  The Players Player Award was a tie between Tina Clancy and Brittney McLeod.  For Tina Clancy it was a just reward being recognised by her team mates on really playing to her full potential over the entire three days and leading up to the tournament.  Brittney McLeod also once again proved she is a fantastic competitor making some amazing touches and showing great grit when required.  The Coaches Awards for the tournament went to two players, both members of the Australian Mixed Opens squad.  Firstly, Rachael Cleave who most definitely came of age in this tournament – leading from the front and playing to her strengths for the team.  It’s hard to see how she could be overlooked for the upcoming World Cup in Scotland.  Captain Sarah Peattie received the other award and it’s obvious this player is a future Australian Opens rep with class stamped all over her game (on and off the field) at the young age of only 18.

Special mention must also go to the other young players in Manly’s ranks – Dani Davis, Laura Peattie, Emma Crerar, and Jenna Hitch who all had solid tournaments.  It’s obvious these girls will all go as far representative wise in the game as they desire.  Well done to Tamara Cochrane who was on debut at State Cup Women’s Opens level and performed admirably.   Last but not least Jess Beakey, Holly Shorter, Chloe Donovan, and Brooke Gibson all made valuable contributions to the team making this State Cup a great success for the Manly Women’s Opens team.  The goal now is to back this up next season in 2011, turning up to Vawdon Cup ready to go and looking to build on the success of State Cup 2010. 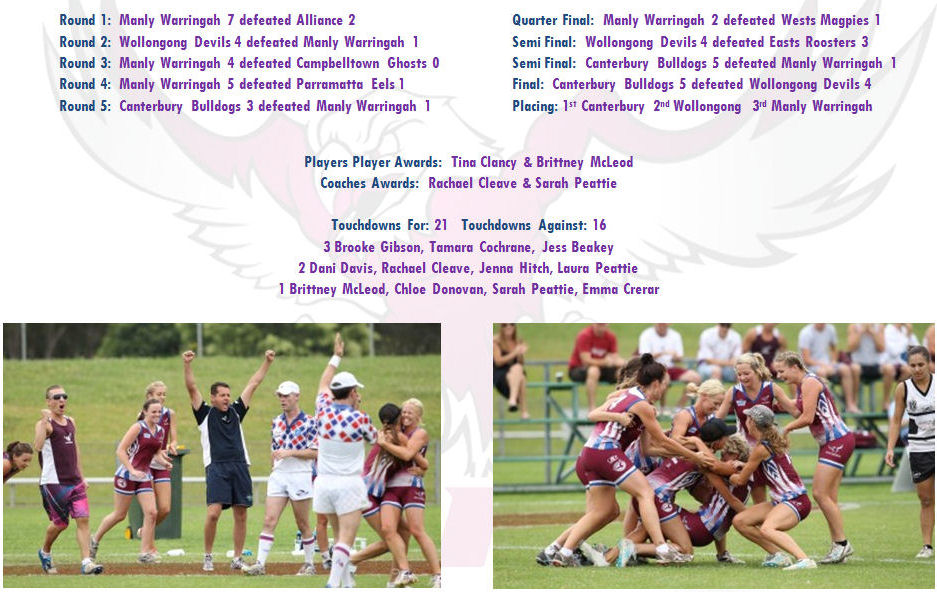