The 2014 Elite 8 & National Touch League has taken place in Coffs Harbour with the NSW Scorpions Women’s taking out the prestigious Elite 8 title going 9 games undefeated. The team boasted 11 Manly Sea Eagles players, with coaches Barry Gibson and Anthony Dudeck also at the helm.   In the Women’s T-League NTL division coaches Jamie Clifford and Keith Smith saw the team make it to the semi final only to go down 2-1.  The Elite 8 Final has been described as the best game of the tournament with NSW Scorpions ending NSW Mets domination in the Women’s division by claiming the Elite Eight title in a thriller.

A touchdown to Yasmin Meakes with 15 seconds left on the clock gave the Scorpions a 7-6 victory.  Three touchdowns were scored in the final minute as the two combatants threw everything but the kitchen sink at each other.  The win maintained the Scorpions’ perfect record at the 2014 tournament.  It also gave them their first NTL Women’s Open title.  Scorpions Captain Elesha Dougal said it was an incredible achievement for her team.  “People said at the start [of the tournament], ‘errr, I don’t know how they will go’ but we have just proved them all wrong,” Dougal said.  “I am so proud of the girls. It was the hardest game we’ve played in and I knew it would be; so credit to our team and credit to Mets. They pushed us.  “We believed in ourselves so a full credit to the girls and the coaching staff.”  In a match that was tit-for-tat until the final whistle, the Mets opened the scoring first through Botille Veitte-Walsh.  Both teams attacked each other’s scoreline but could not get the touchdown.  A bit of Teagan Chandler magic put Laura Peattie over for a touchdown to level the scores.  The Scorpions hit the lead through Yasmin Meakes but it was cancelled out by Claire Moran’s touchdown in the corner. In the final two minutes, Mets scored twice and Scorpions once, which made the score 4-3 in favour of the two-time champions.  Shortly after the break a Hilder pass put Sarah Peattie over the line and levelled the scores again. Scorpions hit the lead when Lizzy Hewitt found the scoreline and immediately after, Mets were disallowed a touchdown due to a forward pass. But it soon did not matter as Kristin Boss scored to level the scores.  The final minute had the crowd on the edge of their seats.  Scorpions thought they had won it when Shellie Davis buried her way over the line to score.  But Mets’ captain Claire Tandek scored immediately and a drop-off was highly likely.  The Scorpions had one last shot and they made it count when Meakes scored the decisive touchdown in the corner with 15 seconds to go.  The referees conferred on the field and they were happy for the touchdown to count. 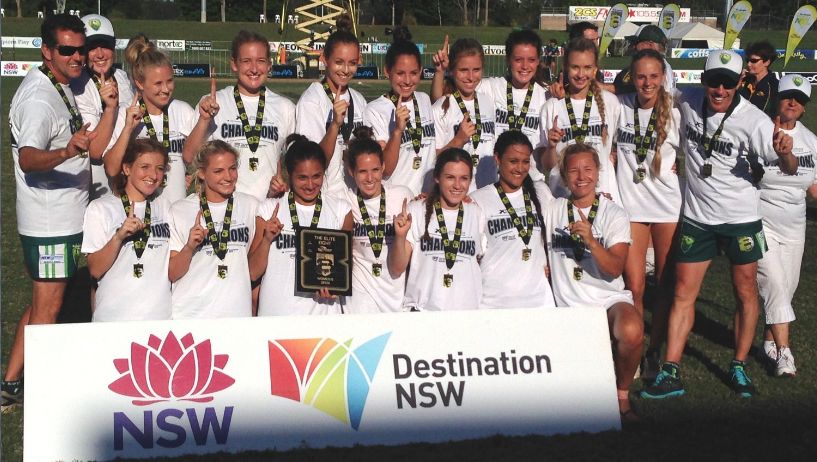